This Alpharetta, GA brewery is coming hard with the hops! 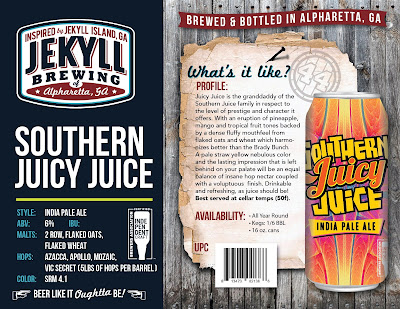 Whaddup!
The team over at Jekyll Brewing and I go way back; I have had the privilege of visiting, hanging out and covering them a few times. It is amazing how they have grown since I wrote and shot this Lifestyle Publications piece on them a couple years ago. Well since then, they have expanded and now are getting extra serious about brewing dope IPAs. Representative Jason Dominy was gracious to bring a four-pack of their delicious, all-new 4HUNDY IPA before I hit the Blue Ridge Mountains for my birthday and now I hear the Southern Juicy Juice might be even better! Below is the Juice's official press release and description J.D. sent me. I can't wait to try it when it launches tomorrow!
Congrats to Jekyll on their success and a special shout out to Lou, Josh, Michael, his lovely wife and the rest of the staff over there!

Jekyll Brewing announced today a new IPA, Southern Juicy Juice. In the same family as their wildly popular Southern Juice, Southern Juicy Juice has an eruption of pineapple, grapefruit and tangerine. Its body is dense and fluffy, similar to other popular “NE-Style” IPAs. And at only 6% ABV, it’s very drinkable and refreshing. Southern Juicy Juice is another beer that was birthed by the freedom that was given to craft breweries on September 1st, 2017, when breweries could sell beers on site in their taprooms, giving them the opportunity to brew more styles and varieties of beers that are smaller batch beers.
Southern Juicy Juice will be packaged in 16-ounce cans and available in 1/6 bbl. kegs. It will be available year-round, but only sold fresh.
Michael Lundmark, CEO and founder of Jekyll Brewing, says, “I am more excited about this product launch than I have been about any other product we have brought to market. It has over five pounds of hops per barrel to really bring the juicy notes forward. With the new law changes in Georgia, we have been able to really put our R&D to work in our tap room. Having 26 taps flowing in our tap room definitely differentiates us as a brewery in Georgia; it also forces us to ‘up’ our game with creativity and max flavor beer offerings. Juicy Juice is hands down among the best beers I have ever had and I can’t wait to share it with everyone. Our brewmaster Josh Rachel has set a new bar for Jekyll Brewing. The future for Georgia beer is bright.”
About Jekyll Brewing
Jekyll Brewing first brought products to market in August of 2013, and has been focused on producing the highest quality craft beer every day while keeping focus on building community.

Check out my Georgia 'Brews to Fall For' article on Creative Loafing! 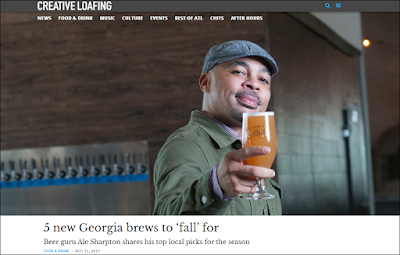 This was shot at Monday Night's gangster Garage by Joef Davis. Here is the article.
I'm baaaaaack!
I know it has been a while but I don't do a birthday, I do a birthMONTH, and October has been one helluva ride so far!
So when I got back from Georgia's Blue Ridge Mountains after chilling in one of my favorite cabins owned by Mountaintop and leaving the technology behind as much as possible, this article called 5 new Georgia brews to 'fall' for welcomed me. You see, before bouncing, I put in a lot of work and hustle so that I can come back to surprises like this. What an honor it is to contribute to an awesome publication like Creative Loafing! When the super cool editor Hilary Cadigan said to write in my true voice as usual regarding cool beers coming out of Georgia for the fall, I didn't hesitate. I had a long list but was limited to five picks. No worries, there will be more I will cover like Jekyll's 4Hundy IPA and SweetWater's new Dank Tank called Fresh Sticky Nugs, but for now, I featured this quintet that really has me excited about what the season of changing colors has in store in the South. I hope you are too!
And like I said, I do the whole month big so look for more things coming your way including a new episode of Interviews With Brews and my Dare To Pair Art + Food event with Eric Nine and Delirium on October 27th at The Argosy in ATL. It will be dope! The flyer is up on the right.
Thanks to all for the birthday wishes too! I appreciate the love.
Peace!
Ale