Breckenridge Brewery gets their cans covered

This is some new sheezy! 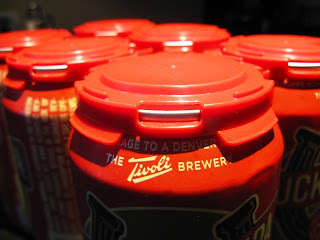 Okay, so I stopped by one of the most knowledgeable and stocked brew spots in the state, Hop City, next to 5 Seasons on Atlanta’s west side.  And yes, I could've chosen so many other brews, but I try to go against the grain every once and a while, so I grabbed a canned six of the Breckenridge Lucky U IPA (6.2% abv) that came with a this red, plastic top cover that I have never seen before. I figured it would be cool to add this new apparatus to my ridiculous breweriana collection, plus my boy Tashir said their Lucky U IPA was on point. Honestly, the packaging—complete with two finger loops—helped seal the deal. I did a little research and found out it was made by a company out of Eugene, Oregon called PakTech which strives on making the transport of beverages more convenient, eco-friendly and resourceful. Additionally, I figured with the can tops being covered, it helped shield utterly disgusting things that could amass during distribution and storage. 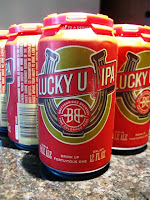 Thinking it was going to be an awesome double IPA with a lot of punch—plus store owner Kraig Torres described the brew as “a fight against an IPA and an ESB with the IPA winning at the end”—the result was anti-climatic; kinda like a draw and no real winner. I desired a knockout with a lot more malty backbone, hop aroma and thicker mouthfeel.  After questioning my boy on the recommendation which has always been solid, he said he loved the Small Batch 471 Double IPA, instead of the Lucky U. I have no idea how I mixed that up, but eff it. I am back out on the hunt. My expectations were initially very high because I thought it was an imperial IPA (the abv is not on the can) so the Small Batch sounds like a winner.
At least sales from the Lucky U goes to a great cause: a portion of the proceeds go to preserving the historic Tivoli Brewery building in downtown Denver, which is now a student complex called the Auraria Higher Education Center for the Metropolitan State College of Denver, University of Colorado Denver Metropolitan State College of Denver and University of Colorado Denver. And hey, Ale is all about positivity, so let me know what you think of the Lucky U. You know the ol’ “opinions” saying. If you agree or disagree, comment on it! It’s all for the love of craft brewing.
Regardless, PakTech’s can carrier was cool and did make carrying a six-pack of cans easier. Then again, there’s not much to compare to considering me purchasing canned brew is not often, unless it’s Oskar Brewery’s stuff or someone else comparable.
Oh, and a birthday shout out to The King of Peace!
Happy sippin’!
Ale
Posted by Ale Sharpton at 2:41 PM 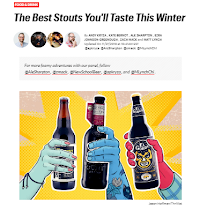