The 5 Seasons’ beer version is, at least! 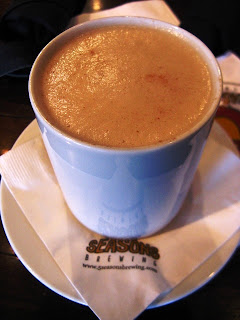 Beer as hot as coffee, anyone? Yep, you’ve heard right! The complete opposite of those commercialized mega brews that supposedly create glacial weather and charging soul trains (like this) has arrived! I had the pleasure of sipping a steaming beer from a coffee cup complete with the saucer at the 5 Seasons Westside a few streets from Downtown Atlanta. Wild, right?

Crawford Moran, the original brewmaster and co-founder of the Dogwood Brewery back in 1995—which served the Southeast great craft brews for a decade before closing doors—has since flexed his creative muscle for the popular 5 Seasons North and West brewery/restaurant combos and decided to unleash five gallons of his newest masterpiece, the “Lady Gaga”—a hot beer to combat the infamous ice storm Georgia’s capital has suffered from earlier this month. “It’s weird, kinda hot and for some reason we don’t understand, people like it. That’s why we named it after Lady Gaga,” Crawford said.
It was a pretty interesting sip to say the least; it had the physical properties and mouthfeel of hot cider, fumes favoring bourbon helped expose the 7.0% ABV and the flavor of tart black cherries dipped in chocolate laced the palate. Crawford later told me that it started out as a “…dark saison, then we let it sit on several pounds of fresh cherries, added just a little bit of some great espresso from Octane Coffee—our neighbors.” He said he added some other secret goodies to the heated brew as well, all in the name of growing our asses back after freezing them off! For only $3.50 a coffee mug, this one-time only sipper was totally worth it.

An added plus: sipping the absolutely delicious and creamy Milk Stout that got its first pump at promptly 5:55 pm with some fellow beer nuts I discovered were sitting at the same bar I was thanks to Twitter made my visit that much more enjoyable.

Make sure you check out one of the 5 Seasons locations sometime. Although all three have the same name, they fervently claim total individuality, brews and fare to the point of almost throwing up gang signs!
Posted by Ale Sharpton at 6:39 PM