The Bitter Southerner has a feature on me!

One of the most influential sites in the South does a profile piece on your homey Ale written by Bob Townsend! 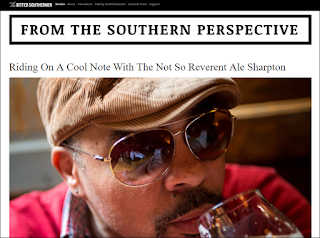 I am so grateful.
Please read this article brilliantly written by the revered journalist Bob Townsend and you will see why. This is what keeps me going and using the talent God has blessed me with. Plain and simple. Thank you Bitter Southerner and all of you for supporting me. This recognition is truly cherished.
And to paint the picture of this interview, Bob and I were sitting in Brick Store's Belgian Bar upstairs with only co-owner Dave Blanchard chilling at the bar preparing for the rush about to come in on a Friday. He said afterwards he loved how Bob and I traded commentary. We were sipping Brick Store's farmhouse ale collaboration with St. Bernardus called Baksteen Winkel. I will never forget it.
Peace,
Ale
Posted by Ale Sharpton at 2:13 PM

One of the best new breweries in the US turns one with this gangster beer list on September 16th!


I love when breweries celebrate birthdays because it reflects their hard work, success and happiness serving us what they aspire to creatively quench our thirsts with! This time around, it’s Scofflaw Brewing Company, one of the South’s most talented—and purposely controversial with their infamous middle-finger-to-haters poses—is set to kick it hard this weekend for its first birthday from noon to 8 pm on September 16th!


I am super cool with all of them and truly appreciate what they have done for especially ATL’s beer scene because they stir up conversation, have grown tremendously, provide a lot of opportunities for aspiring brewers, and make damn good beer. It doesn’t hurt that they were ranked #2 of USAToday’s 10Best Readers’ Choice 2017 travel awards as well! (I was on that panel of experts so it was cool to see some Atlanta representation.)
And with that, I am happy to post their official press release and the gangster list of brews being poured below.
Here's to many more Scofflaw!
Prost!
Ale

To celebrate an inaugural year of unprecedented growth for a new Georgia craft brewery and to say thanks to its fans, Scofflaw Brewing Company will host a One Year Anniversary Party on Saturday, Sept. 16.
In keeping with the brewery’s independent attitude and to mark the recent change in Georgia beer laws, Scofflaw will open its tasting room and outdoor beer garden to all. No tickets are required for entry and customers can order a wide array of beer choices by the glass.
“We’ll be selling cold craft by the pour, like a normal brewery anywhere else in the USA,” said co-founder Matt Shirah, referencing the change on Sept. 1 allowing Georgia brewers to sell individual pours in tap rooms. “We’ll have bottles and cans for sale too. Kids are welcome as always. We’ll do our best to bring the community together now that we’ve gotten through Irma.”
The core line-up of American IPAs will be on tap – Basement, Hooligan, Double Jeopardy, Westside, POG Basement, Sucker Punch and Grapefruit Westside. In addition, there will be four imperial IPAs – Upper Westside, Double Basement, POG Double Basement and the new Goats Milk IPA. The party will also feature the debut of Drop Kick and the return of Lousy.
Several barrel-aged beers will be on tap. Three variations of the much sought-after Absentium imperial stout series – Vanilla, Coffee and Honey – will be poured as well as Maniac, a strong ale fermented on cherries.
The imperial wheat beer known as Sneaky will also be served in Raspberry and Pineapple Coconut versions. Haole, the brewery’s first pilsner, continues its inaugural tap room appearance. And yep, it’s an imperial version – made with Hawaiian honey and pineapple. Including six casks, 28 different beers will be on tap. (Details on the casks are available on Twitter @ScofflawBrewing.)
The party starts at noon and runs until 8 p.m. The Chip McGuire Band begins at noon, followed by DJ Sky. Food will be available for purchase from DAS BBQ. The brewery urges attendees to use ride services such as Uber and Lyft, cabs or designated drivers.

Here are the Brews!

About Scofflaw Brewing Co.
Co-founded by Matt Shirah and Brewmaster Travis Herman, who developed beers on a one-barrel system in the basement of the home of Shirah’s mother-in-law, Scofflaw opened in August of 2016. It has been named by BeerAdvocate, Paste Magazine and USA Today as one of the best new breweries in America. Follow Scofflaw on Facebook, Instagram and on Twitter @ScofflawBrewing.

Check me out on NBC’s Atlanta & Company!

This time, we're celebrating
National Beer Lover’s Day!
Hey Y’all!
It’s my second time on the fun show Atlanta & Company and this time we’re talking about celebrating September 7th as the official date for National Beer Lover’s Day here.
The first go around was hella fun on National Beer Day with my homey Cara Kneer on this episode; this time, it’s with the show’s host Christine Pullara where I featured a lot of beer and glassware from my private stash. The subject was finding beers women were like. I, of course, said that a lot of women I know love brew already, but recommended some popular ones I have won over non-believers with from past tastings.
Check it out and let me know what you think. There is a lot more to come!
Best!

Whaddup!
Once I heard that my hood in ATL was hosting its first Old Fourth Ward Beer Fest , I had to immediately show love on my sidebar for announcements and post it here! The cool thing is that part of the proceeds go to the developing Atlanta BeltLine.
With 75 different brews, plus wine, cider and all kinds of festivities, this inaugural launch guarantees to be a good one. And hey, with Atlanta Beer Festivals hosting it, you know it will be on point! Here is the official announcement below; you can get your tickets here.
See ya there!
Ale
----- 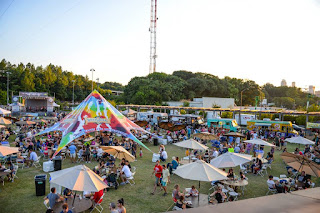 The first annual Old Fourth Ward Beer Fest will be held on Friday, Sept 8th from 7-11 pm. The festival will be a fundraising event within the weekend-long Fall Festival, benefiting the Atlanta BeltLine Partnership. We will have over 75 beers as well as a selection of wine and cider to choose from. There will be live music, and food will be available for purchase.  The beer list will be added to the website soon. http://atlantabeerfestivals.com

PRICE:
Tickets are now on sale. $35 advance, $40 after August 31st. Sales tax and ticket fees will be added. $50 at the door. More details and the link to tickets can be found at our event website: http://atlantabeerfestivals.com