My beer collaboration with New Belgium is about to launch! 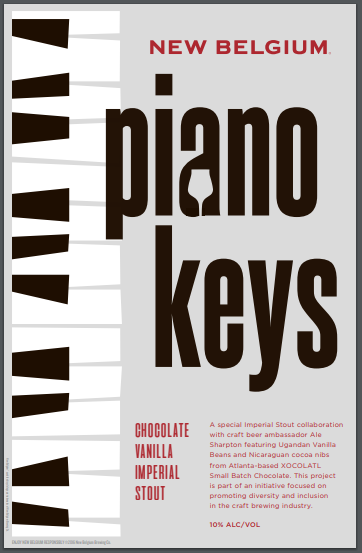 It’s called Piano Keys, a Dark Chocolate and Vanilla Imperial Stout, and I can’t wait to share it with you at the first of many tappings in ATL, Athens, Fort Collins, and Asheville!

Whoa!
Things have been a whirlwind—in a good way—with all of the things I have going on to support this world of craft beer, but I can honestly say this collaboration with New Belgium has been occupying the most of my time and for good effin’ reason! This is a legendary brewing company, and it’s for a great cause! The goal is to help diversify the industry from the imbibers to the brewers, so why not make a dark chocolate and vanilla imperial stout? The chocolate is from Atlanta’s Xocolatl which keeps things super local, plus vanilla beans from Uganda. Ya dig it?

I also co-produced a panel at the Fort Collins headquarters with a prestigious group of influencers of color. Participants included:

I am convinced New Belgium is sincere in their efforts, so I am down to make it happen.
The first tapping of this beer will be at the legendary Brick Store in Decatur Square tomorrow on the 12th starting at 5 p.m. with a Q&A at 7 p.m., and then it will be followed by draft-only pours at other fine institutions in ATL, Athens, Asheville, and Fort Collins (where we brewed it). This includes The Porter, Ormsby’s, Argosy, Midway, Hop City at Krog Street Market, the Chapter Room, Local Republic, Trappeze in Athens, and the NB breweries in Fort Collins and Asheville. If there are more spots, I will update them accordingly. It is super limited and it won’t be bottled just yet, but know there is a barrel-aged version dropping as well; I’m having that at the Fresh Fest in Pittsburgh. 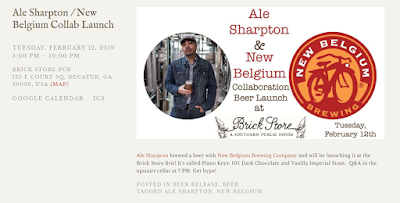 Of course, I am going to give you a breakdown of everything as this progresses, but for now—exclusively on this site—is the full statement I made to New Belgium about how things went down in a nutshell. I also have the official press release below and poster of the Piano Keys Imperial Stout above I led the creative campaign on. Just know I truly appreciate you if you are reading this. Let’s hope this mission that we are all on helps the entire community progress globally.
Once again, thank you.
Peace.
Ale

My statement:
“Off the bat, I want to say how much an honor it was for a craft beer pioneer like New Belgium to reach out to me. I have had the upmost respect for them, their staff, policies, how they treat employees, charitable causes, and of course, beer selections for more than two decades. When we first discussed the subject of how to further diversify the craft beer community and those who actually brew it, I thought making a beer with New Belgium to lubricate palates for productive dialogue on the matter would be a great start. Second, I wanted to brew a beer style that New Belgium has not done often, if ever; imperial stouts are also well-received across the board due to their ability to produce dessert-like flavors; who can say no to dark chocolate and vanilla? Of course, there are subtle implications with that duo to address the overall cause. Last, I’m a huge music fan and the piano is my favorite instrument; ebony and ivory keys closed the deal. I will admit, waiting to try the finished product once we all brewed it in Fort Collins has truly been a stretched-out tease. Well the wait is finally over, and it’s only beginning regarding what New Belgium and I have in store to make the craft beer industry that much more inclusive.”

(FORT COLLINS) What happens when an award-winning beer journalist meets up with a bunch of New Belgium beer experts to talk diversity in craft beer? They brew a beer, of course.

“When we first discussed the subject of how to further diversify the craft beer community and those who actually brew it, I thought making a beer with New Belgium to lubricate palates for productive dialogue on the matter would be a great start,” said Ale. “Second, I wanted to brew a beer style that New Belgium has not done too often. Imperial stouts are well received across the board due to their ability to produce dessert-like flavors; who can say no to dark chocolate and vanilla? Of course, there are subtle implications with that duo to address the overall cause.”

This single-batch, 10% ABV beer from New Belgium’s pilot brewery will soon be available on draft for a limited time at select locations in Atlanta. Piano Keys will debut in Atlanta on Feb. 12 at the Brick Store Pub, with Ale and New Belgium representatives conducting a Q&A session beginning at 7 p.m. New Belgium will tap this beer on Valentine’s Day at the Fort Collins, CO, brewery Liquid Center soon, followed by a release at the brewery’s Asheville location.

For more information about New Belgium or any of its beers, visit www.newbelgium.com. And for a special treat, check out Ale’s Piano Keys-inspired music playlist on Spotify here.