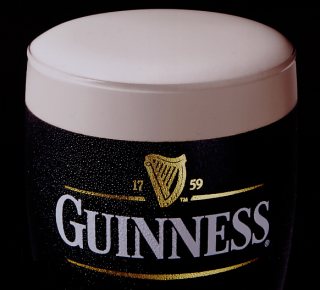 TAP’s ‘Buggs’: The hero of the 'Pour'!
Last night's Guinness Perfect Pour contest at Taco Mac's Lindbergh location was a one wild affair to say the least! There was an MC with a mic; a stage hoisting a trio of taps and three judges; a rowdy, chanting sea of the competitor’s supporters; and a collective of Taco Mac staff from various locations to handle the blitz. With names situated in March Madness-like brackets, bartenders dropped one by one due to disqualifications like an overflowing pour, heads with excessive bubbles, and pints that simply weren't, well…perfect. Basically, three pourers went up on the stage to their assigned taps and poured their Guinness pint in an official glass in front of three sets of scrutinizing eyes—judges direct from Europe who were trained to spot faults of microscopic proportions. (Of course, all participants filled their pint glasses in the customary Guinness two-pour ritual.) The winner of the three contestants advanced to the next round until there were only two left.
Like March Madness, there is always an upset: The reigning champ that yours truly featured this past weekend, Megan Martin (here), was dethroned in the first round by one bubble too many at the top her pint’s head, so the field was blown open after that.
In the end, a cool cat named “Buggs” —a self-proclaimed rabid Steelers fan and bartender at Midtown Atlanta’s Tap—raised the Guinness trophy victorious. I have to give Brother Buggs credit: he had unwavering confidence and swagger since the first round as if he knew he was going to win. Buggs served me a few pints within the last month or so and his demeanor was no different this night, so it was evidently another day at the office for him. Congrats man!
Oh! And just to show you how super cool people in the beer world are, as soon as B-Diddy was awarded the winner, Megan immediately bought him a congratulatory shot (it looked like an Irish Car Bomb) and a pint of Guinness. That’s sportsmanship at its finest!
Overall it was a fun, unforgettable night all in the love of beer and honoring Sir Arthur Guinness, the legend who once fought off authorities who were trying to cut off his brewery’s water supply.  Thank goodness Guinness’ fire and passion saved his legendary Dublin, Ireland brewery that has flourished since 1759 and paved to way for all of those thousands of gangster, microbrewed stouts like these that we enjoy daily.
Slainte! Guid forder! Peeeeeeaaaace!
Ale
Posted by Ale Sharpton at 3:27 PM

Catch This in the Theater!

Yo! Guy Ritchie’s The Gentlemen was my kind of movie! Dope clothes too! Click for the trailer. 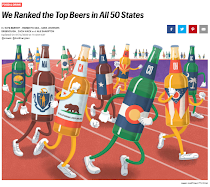