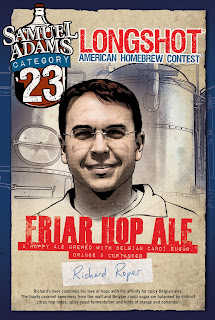 Out of more than 700 competitors, Roper’s Friar Hop Ale gets top honors
There’s no doubt about it, Atlanta, Georgia’s beer scene is one of the most exciting in the U.S. thanks to the collective of pioneers, retailers, brewers and advocates, but local resident Richard Roper deserves the spotlight right now. My man Roper is one of the two winners out of more than 700 national entrants of the annual Samuel Adams American Homebrew Competition. Thanks to following the formula of the world’s other successful brewmasters—having a great recipe, choice ingredients, passion and a dream—Roper’s Friar Hop Ale possesses two slots in the 2010 LongShot “Category 23” variety six-pack that is now available at a retailer near you for $9.99. The remaining four spots in the hauler go to Rodney Kibzey’s Blackened Hops beer out of Illinois and Samuel Adams’ Employee Homebrew Winner Caitlin DeClercq, who concocted the Honey Bee’s Lavender Wheat beer.
Trust me, this is a huge deal! 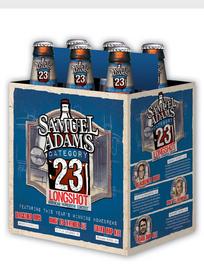 In a nutshell, the Judge Certification Program (BJCP) divides beer into 22 different categories, but there is now a “Category 23” for beers that do not fall under any of the existing traditional styles. Samuel Adams decided to make Michael Jordan’s number the classification for this year’s batch of homebrewed submissions which allowed aspiring brewers to let their creativity run wild with flavors, ingredients and concepts. A panel of no-joke beer authorities which included Jason Alstrom and Todd Alstrom of Beer Advocate, my homeboy Bob Townsend from Southern Brew News, and the man himself—Samuel Adams’ founder and brewer Jim Koch—evaluated everything from the aroma to appearance, mouthfeel, flavor and of course, creativity.
Thanks to Roper’s inventive hybrid of a spicy, sweet Belgian Ale with the hoppy, citrusy and fragrant character of an Indian Pale Ale, he won a trip to the Great American Beer Festival for the finals, walked away with a $5,000 royalty, and now has two customized bottles boasting a portrait of him grinning ear-to-ear in the 2010 LongShot six pack that’s available coast to coast.
Honestly, this is one of my favorite, most anticipated beer series I look forward to every year, so when I found out an Atlanta native won, I had to link up with him and get the scoop on how he became one of the LongShot’s chosen three.
Pull up a stool with me and Roper as we discuss how it all went down and what his plans are for the future.
Ale Sharpton: Congrats, Rich! How long have you been brewing and how did you learn?
Richard Roper: I’ve been home brewing seriously for the past 8 years. I actually brewed my first beer back in the early ‘90’s when I was in college using one of those Mr. Beer kits that I found in a magazine. I didn’t get back into it though until about 8 years ago, when I started brewing with extract kits on the stove top in my kitchen. About 5 years ago, I started brewing using ‘all-grain’, and that’s when I really started noticing a difference in the flavor of my beer. I learned on my own by just experimenting and using some books as reference. Two of my favorites are “The Complete Joy of Home Brewing” by Papazian and “How to Brew” by Palmer.
What do you like about the Longshot series and what were some of your favorites?
There are many things that I like about the Sam Adams LongShot series. I like that it’s all about capturing the intent of the home brewer in his or her beer, and making it available on a massive scale. Meeting and talking with Jim Koch and all the people at Sam Adams has been great too. It’s hard to name a favorite Longshot as I think they have all been good.
I hear you. I loved the Boysenberry Wheat by Ken Smith in 2006, but they are all pretty damn good! What is your overall style of brewing?
I brew all-grain and am usually making a high gravity brew of some sort. I have a propane burner, a 10-gallon cooler I use for mashing, and several brew kettles and carboys. I usually use whole hops in my brews when I can find them. I’m not sure if it gives it a noticeable difference, but I just really like seeing and smelling them in their natural state.
Overall, what brewmasters do you respect and why?
I really respect Jim Koch and all of the hard work and dedication he put into creating Sam Adams. He did it at a time when “craft” breweries were few and far between. I recently met Bob Cannon at the Sam Adams brewery in Boston, and like what he is doing there.
I also respect Crawford Moran. His Dogwood Brewery in Atlanta created some of tastiest beers and was one of the first breweries I visited when I moved to Atlanta. The Dogwood Pale Ale was a favorite of mine. [Crawford is now the head brewer at the 5 Seasons Westside in Atlanta and I featured him here.]
Spike [Buckowski] at Terrapin Brewery is another great brewmaster. They are really creating some great beer.
Also on the list would be Sam Calagione of Dogfish Head. Their extreme beers were some of the first of that kind that I had tried.
Good calls on all these gents! Describe the process of being in the LongShot competition, what you submitted and how you found out you won. 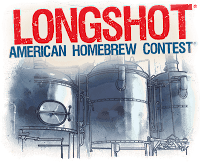 I entered my beer into the contest (at my wife Daniella’s urging) around last April. The beer I submitted was a hoppy and spicy Belgian brew, similar to a Belgian IPA. There were several rounds in which they tasted and re-tasted each participant’s beer. At each stage, they would call and let me know that I made it to the next round. At the beginning of July, they called and told me I had made it to the final four. Sam Adams flew my wife and I out to Denver, put us up in a hotel, and gave us tickets to all of the GABF sessions along with several other beer events. They announced the winners and I got to serve my beer at the GABF for two sessions, which was amazing!
That had to be nuts! On the vain tip, do you like the art they did on your portrait?
I think the artwork for the LongShot was cool. All of the posters and graphic designs they did are unique and encompass everything this competition is about.
Yeah, it looks good. Do you get a portion of the sales for Longshot?
I wish! No, I actually received $5k prize money for winning, plus all of the perks and, oh yea, having my picture and name on six packs across the country!
You can’t be mad at that! What do you think about repping Georgia and what are your overall views about the state's beer scene?
I’m proud to be able represent Georgia on beer bottles across the nation. Georgia has a lot going on in the next evolution of beer. There are several new breweries and pubs opening and lots of new and experimental trends that are popping up. All you have to do is take a quick trip to Atlanta or Athens, Georgia to see it.
That what I’m talking about! So what is next for you?
Beer is always going to be a passion of mine. My wife I want to open a brewery, and have been looking into the nanobrewery concept. I’m currently looking into getting investors to secure funding for this.
Well I wish you a ton of luck and you know I have your back. Congrats, again, Rich!
For anyone who thinks they have what it takes to be a LongShot winner, go here for the rules and regulations: The 2011 Samuel Adams LongShot Competition. Good luck!
Posted by Ale Sharpton at 3:23 PM